First Conference of Ministers Responsible for Meteorology in Africa 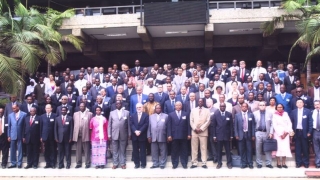 The First Conference of Ministers Responsible for Meteorology in Africa convened on 12-16 April 2010, organized by the World Meteorological Organization in partnership with the African Union (AU) and the Republic of Kenya, who hosted the Conference.  The Conference was attended by 48 African countries, 32 ministers and over 406 participants, including technical experts from the weather and climate communities as well as several leading users of climate information in Africa and beyond.

The Nairobi Ministerial Declaration established the African Ministerial Conference on Meteorology (AMCOMET) as a high-level mechanism for the development of meteorology and its applications in Africa.  A Ministerial BUREAU was elected composed of a Chairperson (Kenya), First Vice-Chair, Mali, Second Vice-Chair, Zimbabwe, Third Vice-Chair, Congo, and Rapporteur (Morocco).

The Conference also designated a Task Force comprising of the five Bureau members and five additional members representing the five sub-regions in Africa (Algeria, Ghana, Cameroon, Uganda and Zambia).  The Task Force would define the institutional framework and internal arrangements of AMCOMET, supported by the WMO as the Secretariat along with the African Union.  The Task Force was further mandated to develop an African Strategy on Meteorology to enhance cooperation between African countries and enable the strengthening of National Meteorological Services’ capabilities as well as existing African regional and sub-regional climate centres.  The proposed strategy would be submitted at the Second Session of AMCOMET, foreseen to take place in 2012.